You are here: Home / Blog

FlowPaw, a London based company, is close to reaching its Kickstarter campaign goal of £19,500 having raised £12,912. FlowPaw is a robust learn to code kit following the success of Kano that aims to help children, both young and old, learn to code and build command driven projects like games, robots, music players and even an alarm system. Based on research that shows children learn better by having something tangible in their hands, FlowPaw hopes to follow Kano’s success which raised over $1 million dollars with their Kickstarter campaign.

FlowPaw looks like an unfinished project, but that is by design. It is a fully accessible circuit board that has plug and play interfaces and all sorts of components that are necessary to build a wide array of fun projects. The core components of the circuit board are listed below.

FlowStone is FlowPaw’s award winning graphical programming software. By connecting building blocks together, you can “draw” out a program. One of the coolest features about the software is that it runs in real time! Yes, if you are struggling to get that alarm to fire when someone is getting within 5ft of the proximity sensor, keep testing on the fly with the graphical interface until your code works. With the immediacy of this program, children see results instantly and are constantly engaged. 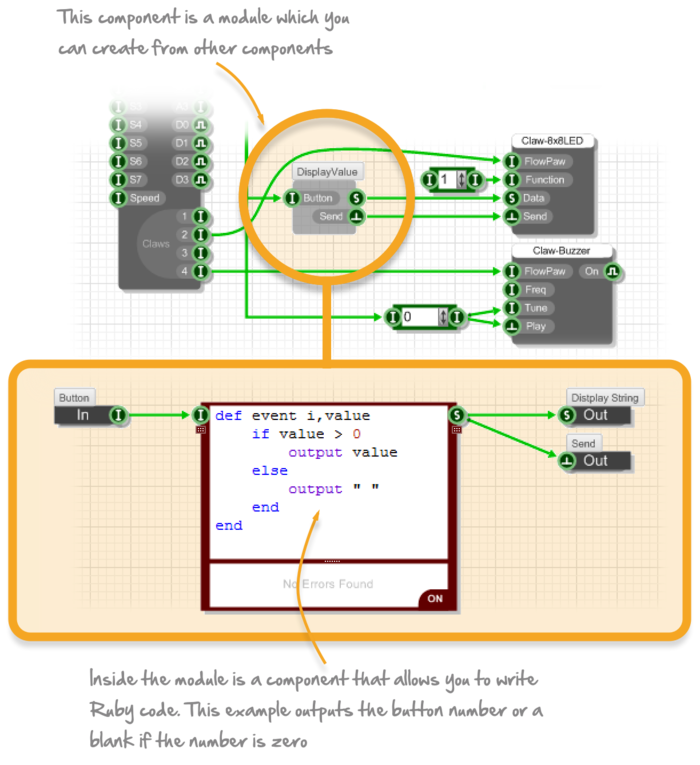 With the graphical “blocks” interface, users can see how the pieces work together while seeing the code that makes it all happen. Eventually, by editing the code directly, children can “hack” their way to new functionality and create new programs.

One negative with FlowStone is that it is not compatible with a Mac (note: the FlowPaw is compatible). However, there are options. A virtual machine software, like Parallels, can be used to run PC based software on your Mac. In addition, if you have a Raspberry Pi, you can plug it into the board and program using Python. Both of these options may require additional purchases if you don’t have Parallels or a Raspberry Pi laying around. Python defeats the purpose of having a graphical interface to help children learn to code. I hope a Mac version is available in the future.

What Can I Make With FlowPaw?

With the impressive amount of expansion click boards and a graphical programming language, there are many possibilities for building fun widgets and gizmos with the FlowPaw. There is definitely room for creativity to shine with this learning kit. To get your ideas flowing, here are some examples the FlowPaw team has demonstrated. 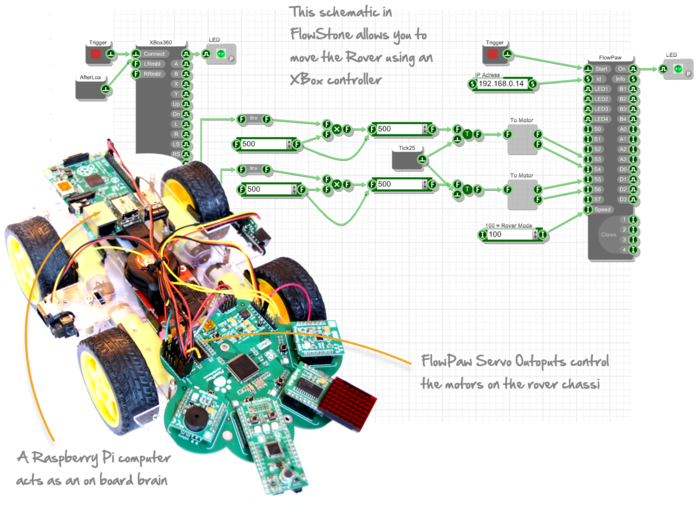 Would you back a FlowPaw? Do you think it will reach its goal? Would your children have the patience? I’m interested in this little kit because of the expansion possibilities and the graphical interface. I’d like to hear your thoughts as these kits are becoming a hot learning tool.

Although this site recommends various training services, our top recommendation is Treehouse.

Treehouse's mission is to bring technology education to those who can't get it, and is committed to helping its students find jobs. If you're looking to turn coding into your career, you should consider Treehouse.

Read our full review of Treehouse…